This is my June entry in Flip's Photo Quest (number 18). I don't have much of an excuse for being late, but I do have an excuse for being this late: my main computer, with all of my graphics software, is in the shop. I was going to wait to import the photos until I got it back, but I decided to try out Google's Picassa 2 on my Windows XP box and see how it worked. As it turned out, it worked quite nicely. 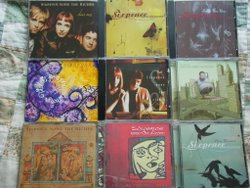 1. My best collections are Christmas related, but I decided I'd save that for some other photo, when I can show something that is actually well dusted and on display. I collect a lot of books, but who wants to see a messy, disorganized bookcase? With that in mind, the collection I present is my newly finish collection of Sixpence None the Richer albums.

Clockwise from top, left corner: Kiss Me (Original Single with “Sad But True”) [1997], Breathe Your Name (Single with “Northern Lights”) [2002], Don't Dream It's Over (Single with “Don't Pass Me By”) [2003], the Best of Sixpence None the Richer [2004], Divine Discontent [2002], this Beautiful Mess [1995], Sixpence None the Richer (newer version with “There She Goes”) [1997 [There She Goes - 1999]], Tickets for a Prayer Wheel (EP) [1996], the Fatherless and the Widow [1993] (in the center). That is everything that was released with the artists' apparent blessing; their former label has released several “best of” releases that simply take some tracks from Tickets to a Prayer Wheel, This Beautiful Mess and the Fatherless and the Widow, whereas the only “best of” mentioned above had unreleased tracks on it and came from the label the band ended its career with. 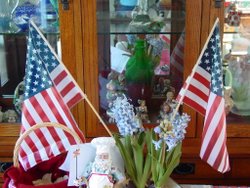 2. A flag, well, two, actually. I thought about hunting down a Missouri State Flag to go along with this, but you can just see that here. 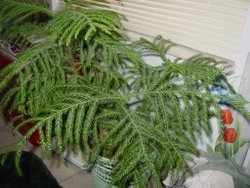 3. This Norfolk pine (araucaria excelsa) is something I've grown; I have a larger one as well. 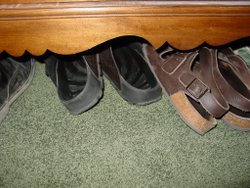 4. My shoe shelf, is really just my shoes stuck under my dresser. Does that count, Flip? 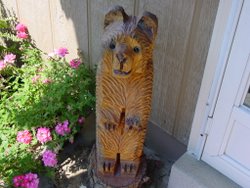 5. Here's what was once a tree stump. I actually saw this guy carved by someone who was very, very good with a chainsaw. There was a whole group of chainsaw artists that setup shop in Branson years ago, and this one came home. I cannot remember the price, but for all of the work, it was really reasonable. He hasn't been refinished for six years, so this year he is waiting for a new coat of spar varnish.

This is my May entry in Flip's Photo Quest meme. I was a very bad boy — this should have been up by mid-May at the worst, but here we are approaching mid-June and I am just finally getting it up. I shall try to do much better with the June PQ. 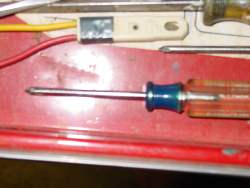 1. A tool, more specifically a screw driver. As someone who is not mechanical, my main use for tools is connected to my work with computers. That means this is the most indispensable tool in my arsenal, other than my Leatherman multi-purpose keychain knife/screwdriver/plyers, etc. thingamabob (but Flip prohibited taking pictures of Swiss Army knifes for this particular assignment).

2. There is no number two photo because I do not wear a spring jacket for “when the temperature is between 10 and 18 degrees Celsius (50-64 in Fahrenheit, I think)”. I have a blue, thinner jacket I wear for when temperatures are in the mid-to-low 40's and below, but nothing in Flip's range. In fact, my general rule of thumb is that the shorts come out when temperatures hit 52 degrees Fahrenheit (11.1 C). 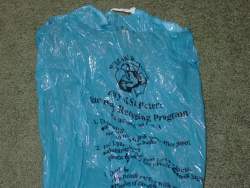 3. This is the container where recyclables are placed when I am a good, ecologically concerned citizen (which, I'm afraid, isn't as often as it should be). Welcome to the St. Peter's Municipal Blue Bag program. Stick your goods in the bag and throw it in your municipally assigned Big Green Beast trash can. Some poor guy at Recycle City (yes, they call it that) gets to dig through all of the trash and pull out the Blue Bags. Ick! 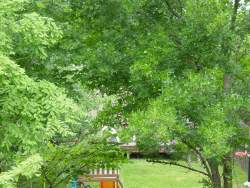 4. That is the neighbor's swing set, the closest playground equipment from my present, secret, undisclosed location. 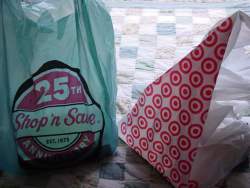 5. Two plastic grocery bags, one from Shop 'n Save, a local division of grocery behemoth SuperValu, and the other is from — you guessed it! — Target.

As I said yesterday, I'm not now participating in Flip's Photo Quest meme. Here are the photos and accompanying descriptions for this month's quest: 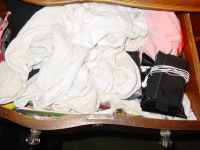 1. This is my sock drawer drawer, which also collects other miscellaneous stuff, such as my iPod, which you can see in the small black case on the right side. Normally there are some black socks in there that would add contrast, but none of them are clean at the moment. 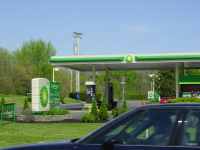 2. The second photo is of a gas station. This one is a bp station, located in Chesterfield, MO, that was converted from an Amoco last year. The picture size makes it a bit hard to see the prices, which were $2.10/gallon for regular unleaded and $2.20 for “silver” unleaded (though unlisted, I presume premium was $2.30). All prices have 9/10 of an additional cent on them, so you might as well round up a penny. This was taken last Saturday, and was about in the middle of the range between QuikTrip at $2.05/gal. and a ConocoPhilips station that was charging $2.15/gal. For my European friends, that is €0.42/liter (or $0.55/liter). 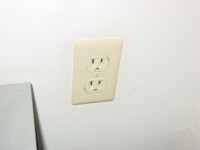 3. A generic, empty electrical wall plate. Normally this one is behind some equipment, so it is rarely used. 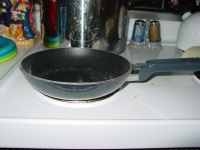 4. This is my beloved omelet pan, which I submit for the frying pan portion of the quest. This pan is just the right size for a nice, fluffy three egg omelet. It hasn't been getting much attention lately, however. 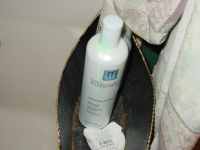