This commercial is just brilliant in its absurdity. It is a sequel to one from last year.

The Importance of Right Theology

As someone who aspires to the title of theologian (though has in no way earned the right to it), I certainly believe theology is important. Clearly when we are talking about God, there can be few things more important than understanding him and his will as well as possible. But, the greatest gift from God is not teaching of doctrine or something along those lines, but love (1 Cor. 13.13).

What does that mean for us in general? We as Christians put too much emphasis on right doctrine as if it could save us. We are functionally working as those saved by doctrine alone — the specific doctrine a given person favors is of little consequence. The other day, my wise professor Dr. Jay Sklar was relating to us a story about another faculty member at Covenant who was in Scotland. That person observed that when Christians are only a two in a hundred statistically, suddenly our little dogmatic skirmishes seem less important and simply finding someone else with whom one shares the Apostle's Creed seems enough.

In many ways, it is.

That is not to say all the minutiae is unimportant, many things within the realm of Christian dogmatics are utterly important. But not as important as the core truth of the Gospel: that the one, sole creator God of the universe was incarnate among us, died for us and restored us into a body of which he is the head. That's the heart of our story. It is not the end of our story, but the beginning which convicts us and leaves us with no choice but to make every theological confrontation within the bounds of historic Christianity one of brotherly or sisterly love.

He has told you, O man, what is good;
and what does the LORD require of you
but to do justice, and to love kindness,
and to walk humbly with your God?

I would rather serve all day alongside a Christian full of love for God and for those around him, but with messed up doctrine, than an hour with a Christian of great doctrinal strength and a condescension for all those with less perfectly constructed theological constructs.

I am not sure why, but I am terribly hungry for steak fries. The problem is that I cannot think of any place in the area that serves steak fries! I'll have to get some next time I'm in St. Louis County, I guess.

Why an I telling you this? I'm not sure!

I last ate at Tony's about eight years ago and had their “White Chicken Nachos” (chicken, white cheese sauce and nachos). I met a friend there today after he found a coupon for Tony's lunch buffet in the paper. I didn't recall them having a buffet before — perhaps they did, but I think they've expanded quite a bit since I was last there — but it sounded interesting to me.

What a pleasant surprise! They had toasted ravioli, numerous St. Louis-style pizzas, a beautiful salad bar, white chicken nachos, some kind of chicken, burgers, two soups and cake on the buffet. I had the majority of those things and probably far more of them than I should have, at that. The pizza was quite good and I love toasted ravioli, so that was a treat. The cake was good too. Normally, the buffet is $6.99, but with the coupon it was a dollar or two cheaper than that.

All I can say is, if you happen to be on Main Street in St. Charles on a weekday, give Tony's a visit. I was pleasantly surprised and I think you would be too.

I had never eaten a Chick-fil-A before I started at Covenant. However, I heard from many of the students around campus about the “high holy day” of Wednesdays, when Chick-fil-A showed up on campus and had food for sale. Part of this can be explained by the total lack of hot food for sale on or near the campus the rest of the week, part of it can be explained by those looking for a bit of a taste from the South (particularly since many CTS students are from the South), but apparently Chick-fil-A can just generate a following beyond those reasons. 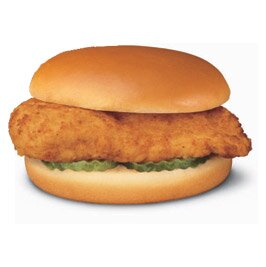 The funny thing is, I've probably had seven or eight Chick-fil-A meals this semester, and I'm starting to look forward to that special day of the week myself. Yesterday, I was at a local mall after lunch and happened to walk through the food court, which has a Chick-fil-A. They were giving away samples, and I had a nugget. After eating that nugget, I knew I really needed to get my Chick-fil-A sandwich today, along with their tasty carrot and raisin salad.

It doesn't hit me like “the Crave” for White Castle, but I am none the less craving a simple chicken sandwich. Interesting.

I know what all of you are asking. “Tim, if I happen to be driving down Hwy. 47, by Cuivre River State Park, where should I stop to get a nice, tasty lunch?” Well, of course, I have an answer for that most frequently asked of questions: the Park Side Mini-Mart. It's a little Sinclair gas station that looks, uh, decrepit. But, amidst the standard convenience store stuff, and some fishing supplies, you'll notice a little deli area. Between October and April, they have home cooked chili every day, which can be served a number of ways — I recommend the $3.00 Frito chili pie (cheese, fritos and chili). It is the best chili pie I've had the pleasure of eating.

But, they tell me that their most popular food item is the cheese burger. It looked good too, and they make the patties there rather than having some kind of pre-pressed burger, although I've not yet tried one. I have tried their french fries, which are crinkle cut and reminiscent of some little diner — that is, they are really good, if not terribly healthy. Deli sandwiches? Yup, they have them. Pizza? Yes, apparently they even have a breakfast pizza. They even have some kind of cheesy cauliflower dish. I found out today they've actually been at this business for thirty years.

So check 'em out next time you are just outside of Troy. I think you'll be pleased.

Volkswagen has a savvy marketing department to say the least. A few months after my parents purchased their Passat, which features a special slot to hold an umbrella, an umbrella arrived in the mail as a free gift from VW. It was the kind of thing that added a new surprise to a car that was several months old already.

Apparently, VW must do this for all of their cars. The other day I received a colorful little box from the company. In keeping with the company's theme that the New Beetle is a “Force of Good,” they gave me a Force of Good kit. It has handy things for “doing good,” such as bandages, floss, a pen (that can be lent in a pinch) and hand sanitizer. Yeah, it's nothing major, but it is kind of fun, and a nifty “owner loyalty” idea.

It makes me feel like, well, doing some good.

Ribs You've Gotta Try and the Store With 'Em

I'm normally not a big proponent of ribs. I like barbecue ribs just fine, but they're messy and usually provide very little meat for the effort. Give me a pork steak and be done with it already. But, Aldi — yes the Aldi, the little grocery store with private label “cheap brands” — has rib meat already removed from the bones in their frozen meats section that is better than any ribs I've ever tasted before. They're marinated in a healthy pool of hickory barbecue sauce of excellent quality, ready to be placed in the oven and served in about an hour or two. The meat has a robust barbecue flavor and is extremely tender. I had some tonight and just writing about it makes me hungry for more.

When the aforementioned friends of the family came into town, my mother made a batch of these ribs and they were a humongous hit. In fact, the couple that was visiting us had previously had a bad experience with Aldi, but this convinced them that maybe the Stock-up Store wasn't so bad after all. If you have an Aldi in your area, you really should try to find some of these ribs before they go away — they're only here for the season. You'll find them right by the steaks in the freezer case.

And, while I'm on the subject, let me count the ways that I love Aldi. Sure, it has rock bottom prices, but it also has some of the best quality products anywhere. Period. If you've avoided Aldi because of their reputation as a “cheap place,” you ought to give them a chance. Every Aldi private label product is backed by an amazing “double guarantee” — if you aren't satisfied, they'll refund your money and give you a replacement of whatever you returned. Once we got a bad package of swiss cheese for example, and walked out of the store with a new package and a refund in hand. Aldi also gets special buys of normal brands, but often, Aldi's products taste better and are more consistent.

Their Grandessa premium line includes scrumptious pies, for example, that best not only other grocery stores, but also often some of my favorite restaurants (their chocolate silk is the best chocolate silk, bar none). They also have other premium products, like energy drinks; Aldi's Red Thunder has a very good, fruity taste and rings in at four cans for $2 at the moment (on sale) and normally just $3. Compare that to just one or two cans of Red Bull or some of the other popular drinks.

To top it off, you'll find special buys of computers, camcorders, scanners, printers, shoes, pools, furniture, and — at the moment — even car wax and fishing poles.

But, it is late, and I should go to bed rather than getting something to eat. Still, a nice pizza would really hit the spot right now.

Another Sunday Lunch from Michael. Yes, I am two days late, but that still isn't as late as I am on the July PhotoQuest.

1. What is your favorite fruit pie?
Well, I'm not a big fruit pie person, presuming that by that you mean meringue-less fruit pies. My mother made a very good blueberry pie for the Fourth of July, though. Maybe I'll go with that. It is cheating, however, since it is meant to be served with whipped cream on top, hence making it somewhat of a cream pie.

2. Is the Boston Cream Pie, a pie? Defend your position.
I plead ignorance.

3. What is your favorite custard , cream pie or pudding pie?
Lemon, followed by banana, followed by chocolate silk.

4. What other desert item do you like with your pie?
Depends: on a fruit pie, you must have ice cream. On a cream pie, just meringue or whipped cream.

5. Who makes the best pie?
My mother. And, no, she does not read my blog, so I am being honest. Really.

If you mean pies purchased some place, I'd say the Hen House (in Michael's neck of the woods) is my favorite.