Well, I meant to reply to my own meme earlier, but… the best laid plans… Since I took so long, I thought I'd just use my answers for another blog post.

Q - What is your favorite part about the month of April? Reciting Chaucer, no doubt.

T - Do you have a memory of a favorite April? What was it? Yes, April 2005. I spent a lot of time with a particular friend I am no longer in contact with (sadly) having a series of delightful outdoor conversations while enjoying the aforementioned spring air. I miss those conversations.

W - Did anyone fool you on April Fool’s Day? Yes, several people did, in fact. sniff

Well, the semester ended for me last Friday, when I turned in my last (and largest) project, a full length play on a part of Reformation history. More on that later.

I'm starting to unwind from the semester and hope to resume normal posting — finally. It has been a very long haul over this past year. I've been drained and stressed to the max, and while being in seminary has been a genuine blessing, I am thankful for some time to rest.

This week has been perplexing for a number of reasons, but also restful. I'm starting to feel a bit like myself again, at least.

Well, almost two weeks ago, I apparently injured my upper back and left arm. It wasn't very apparent at first, but really started to bug me after I participated in a few games of Wii Sports bowling (not surprising, since other than the lack of the heavy ball, one moves in precisely the same way as real bowling). I think the source may have been my purchase and subsequent carrying of the complete Catholic Encyclopedia (16 volumes), which I got for under $30 at a book sale at Covenant's library. It gradually got worse over the weekend before the last one and into last week, with the climax of pain somewhere between last Wednesday and Friday. Particularly since Wednesday or so, I've noticed typing irritated my upper arm and back, so I've been trying to spend my time on the reading I need to do with the plan of catching up on written — typed — things after a few more days. I think I'm slowly on the mend, finally. It hasn't been that bad, and I'm not writing this to complain, but merely to note the cause of my continued absence.

In the mean time, I have a post or two in my head for here and an article or two for OFB, but those will have to wait. I'll be back… (pun intended.)

George Wishart It Is

I have a lot of writing projects I want to do, but it seems like with as busy as semesters are, most of them get relegated to the “sometime in the future” stack. Especially book ideas, but even article ideas. One thing I have been in the mood to do for awhile is try my hand at a play again, but that, like the other ideas, has been relegated to the future bin. Now, I think that will change.

For my elective class on Presbyterian History, the term project is open to creativity, so I have discussed with the professor the idea of writing a historically grounded play. After a few false starts, I think I'm going to focus on the end of early Scottish Reformer George Wishart's life. There is a lot of intrigue involved, particularly given David Cardinal Beaton's unjust execution of Wishart and then the retaliatory death of the cardinal shortly thereafter. It seems like it has good potential for dramatization and wouldn't require a lot of artistic freedoms to create a good sense of timing (too much liberty in plot might not be good for a history project!). Hopefully I can take some time to dive into the Bard's histories once again to freshen up with some new ideas before I go forward; I'd also like to draw some ideas from John Webster. While both Shakespeare and Webster aren't quite contemporaries of Wishart's, the Elizabethan/Jacobean form will suit the story well and still be somewhat related in time to boot (not that it really matters).

I'm trying a new meme from Saturday 8. Feel free to answer in the comments.

1. a restaurant was out of the food you wanted?
That would have been Sonic (“America's Drive-in”) a week or so ago. They had an equipment breakdown and could not serve a whole bunch of different menu items.

3. you were denied a promotion?
Never. I'm my own boss, so I promote myself every time I ask for a promotion.

4. you didn't get the job you applied for?
The last consulting bid I was turned down on was this past week. The only formal job application I've filled out was one I filled out in August at the request of the professor who wanted to hire me as a TA. I'm now happily doing a few TA duties on the side.

5. a friend cancelled a lunch date (or other meeting) on you?
In the other meeting department, I had a small group meeting canceled three weeks ago. I didn't know until I arrived to attend.

6. someone took credit for something YOU did?
This spring.

7. an appliance (or something in your home) broke?
Last month the Microwave died.

8. you were denied something credit-related? (loan, credit card, a rental, etc.)
2004. I tried to apply for an Amazon.com Visa, but I didn't have enough credit history for it. I went with my bank's credit card instead, which worked out fine, although it lacks any kind of rewards program.

Well, I didn't have a chance to go with the very good suggestions of either Travis or Mike, but since today (or rather, now, yesterday — the 24th) is my birthday, I thought I should put up the first post of “the new year.” Perhaps tomorrow I shall see if I can do one of those suggestions…

And so it comes, and so it goes.

September 19, 2005 was a day that fits the context of my poem I posted last week. A day of the tragedy of ordinary fate. Nothing that seems especially terrible happened that day in the light of what goes on in the world, and yet what did never left me either. That's pretty much how I expected it to be when I wrote my entry two years ago. It was a capstone on a year journey that included the day covered in my little Nameless series (part I, part II) and miscellaneous other posts along the way.

So what shall I say today? Well, the day is now past. On to another year to see what will happen with this day's memory. Perhaps by next year it shall be a little fainter.

Hat tip to Mark, as usual.

How do you sleep? Left side, right side, back or stomach.
Varies. Usually slightly on my side, mostly on my stomach.

How do you brush? Toothbrush, electric, tree bark, etc.
Only the freshest tree bark. Good stuff that tree bark.

Ahem. I have a regular and an electric toothbrush. I prefer the regular, though.

How do you do your hair? Air dry, blow dry, Head out of car on highway, style, no style.
Towel dry a bit, then air dry. I only stick my head out of the car to see if I can understand what it is that dogs enjoy so much about that experience. So far I have only been confirmed in my position of the superior nature of cats.

How do you wake yourself in the morning?
An alarm clock, when necessary.

What is the first thing that you do when you awake?
Preferably get a cup of coffee and read the Post-Dispatch.

What do you sleep on? Waterbed, spring, foam, floor, outside, etc etc.
A spring mattress with foam pillow top.

Zose Canaan Days I Use to Know

Well, I went to the Muny last night, and saw Joseph. It was spectacular. And if you haven't yet seen it, you should go get a ticket, or get there early and enjoy one of the free seats up on top. Though the sets were more subdued then the Fox Theatre's performance a few years back (with the Fox's broadway tour-ready stage), the Muny's talent actually outshone the Fox's performance, I thought.

I've been spending the last week in partial sabbatical from the Internet as other things consumed my time. I'll be back to normal posting soon.

Dr. Lucas posted his results on the “Which Theologian Are You?” quiz, which prompted me to take the quiz again. I've taken this quiz two other times that I could find in my blog archive (I thought I had taken it even more). At any rate, there is some variation — beyond the basic result that I am always Barthian first. Happily, my second favorite theological saint, Anselm traded higher, returning to a second place position behind Barth (if Aquinas, my if-I-were-a-Catholic-he'd-be-my-patron-saint, where in the survey, he'd probably score high on my graph too). Oddly, while Calvin traded high in February, perhaps rallying from influence of Covenant, he fell to a new low this month. Barth rallied from a dip, to return to his previous high of 100%. Luther isn't terribly interesting — he stays pretty stable. Unfortunately, Tillich rose again from the depths of 0% and is now busy making my theology more ambiguous again: my theology is not, but rather is; it is not an existential thing, but rather an existential question; it is the ground of theology, creating a strict sense of complete dependence on theologians, particularly those that focus on kerygma rather than apologia. cough 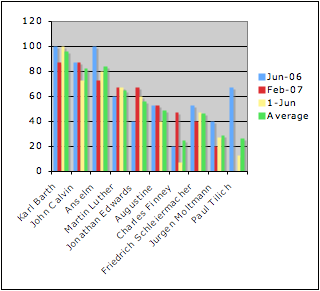 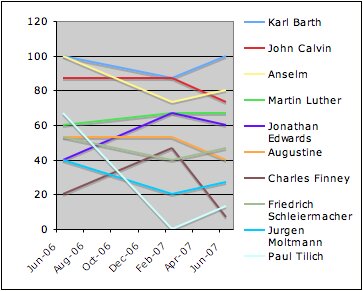